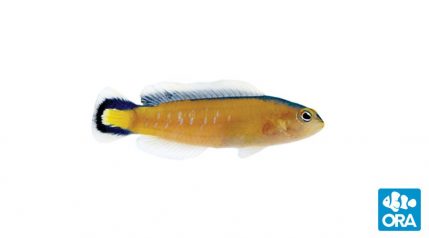 Dottybacks are a group of small, colorful basslet-like fish that inhabit the crevices and small caves of the coral reef. They have been popular with aquarists since the advent of reef tanks. ORA currently cultures several species of this family of fish, and has made them widely available to the marine aquarium hobby. ORA always grows dottybacks to the proper size before sale, ensuring that hobbyists obtain fish with the best chance of acclimating to their new home.

Dottybacks can be kept in smaller aquariums, although larger tanks with plenty of live rock are preferable. They are territorial and will defend the area they have claimed as home quite aggressively. Housing several dottybacks depends on the species, the size of the aquarium and the amount of hiding places available. There is some success with introducing several dottybacks at the same time, as this allows each to establish a territory to defend, without giving an advantage to one. Once a dottyback has become accustomed to a tank, it is usually difficult to get another introduced without being attacked. Dottybacks vary species by species in aggressiveness, and care should be taken when deciding which to introduce to an aquarium community.

Dottybacks are easy to feed, and frozen foods such as Mysid shrimp or Brine shrimp are readily accepted. They are also known to feed on small bristle worms, and have been introduced to tanks to help control excessive bristle worm populations. Aquacultured dottybacks are also fed pellet or granulated food.

The bright colors and the way that dottybacks swim in and out of the reef rock have made them one of the most popular reef tank families. They will not harm other invertebrates, with the exception of small crustaceans they may feed upon.