The Black Cardinalfish is a hardy member of the Apogonid family that has recently gained popularity in the aquarium hobby.  It has a large distribution in the Western Pacific ocean and there may be several distinct species that bear the trade name Black Cardinalfish.  Their dark color, large head and swimming behavior with all fins erect has a likeness to a hovering Coelacanth.

Black Cardinalfish are paternal mouthbrooders and lay very large spawns.  Unlike the Banggai Cardinal the tiny larvae are released from the mouth immediately upon hatching.  Their maximum size is 4.5” and they are fairly peaceful with other reef fishes.  They may be kept singly or in a group.  Only during spawning will females become somewhat combative with others of the same species.  ORA Black Cardinalfish eat a variety of frozen and pellet foods however hobbyists may wish to avoid housing them with small crustaceans that they may see as food. 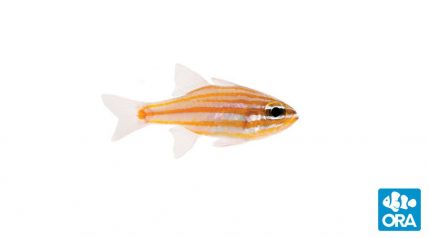